Full Moon in Aries: Love You to the Moon and Back 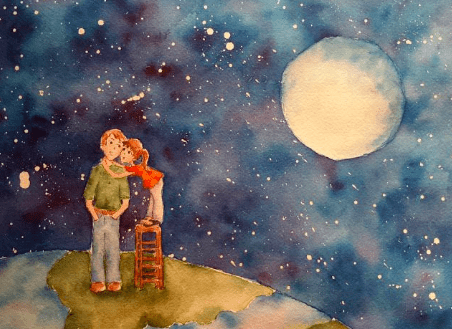 To my Friends, You Warriors of Love, You Defenders of Light:

My stepdad, a Defender and Protector of those he loved, died last week. And as I write these words I have to be honest. I’m not sure where this lunar love note will go and how well crafted it will be.

So I ask of you your kindness and your patience in allowing me to write a personal reflection with an Aries bent under the bright spotlight of this Harvest Full Moon (September 24, 8:52 pm MST).

“What do you love about writing?” he asked.

From my stepdad’s hospital bed, this question for me would be his last before he took his final breath 36 hours later (September 17th at 5:25 am).

A man of few words even in the most talkative of times, a lump formed in my throat as I sensed how little time we had to discuss matters such as these, the cancer in its most aggressive form rapidly attacking his lungs.

I wiped away tears as I moved my body to the side of his bed.

I told him about my love of inspiring in others the desire to dream a big, beautiful life and to unlock the keys to living those dreams in learning the love language of the Moon and the archetypes found in our birth charts.

“Huh,” he replied with some satisfaction.

We chatted a minute more about how strongly I believe we can be the Heroes and the Heroines of our own Love Story based on a higher vision and a grander plan than what many of us believed we ever could.

Secretly, I was hoping he’d hear what I was saying and decide at that moment, he would commit to writing his own miraculous story where the Hero pulls through, heals the cancer and lives a long, happy life.

On this Full Moon, through the big, fat tears I’m crying, I’m contemplating the pain I have about his physical absence, but I’m also thinking about my life purpose in light of the Warrior I saw in him who shaped the Warrior I see in me.

My stepdad had a hard life in many ways, but he was a Fighter–not a Fighter who used his fists or even his words. He was kinder than that.

He had regrets and hurts and secrets and dark times like many of us do but instead of hurting others in the harmful ways some Fighters do, much of the pain remained inside–but not all of it. He was a Lover too.

A Fighter and Lover as well, I learned later in life that I had to transform the pain or it would eat away at me too. I wanted to become a Warrior for Love and show others a way through a tragic childhood, a horrible breakup, an unfulfilling career, a series of heartbreaks.

To do this, I had to lay down a long time ago the weapons that harm–guilt, shame, sarcasm, dishonesty, control, isolation, unforgiveness, anger, self-deprecation, self-loathing–the list has been long.

Sometimes I become stuck in emotional quicksand and often I invoke one or more of the archetypes from the Aries clan to blow me sky high, leaving the role of the Victim far behind, free once again of the traps that make me think I can’t live my most beautiful Love Story I know I’m living to tell.

I look to see where I’m hiding out or seeking safety in old strategies rather than taking conscious action led by that higher vision.

I see now how this resilient part of me was formed in part under my stepdad’s care and loving attention.

For the first three years of our relationship, my stepdad nurtured the Athlete in me, sweetly encouraging me to reach for the seemingly impossible, ultra-secret dreams I had to compete at world-class levels in sports.

To this end, he bought me an expensive tennis racket (money which should’ve been spent on bills) and endured hours of a rude twelve-year-old ingrate who pretended to hate playing with him. He devoted hours spotting me in our unfinished basement as I ran full-speed across our wooden floors to dangerously hurl myself in the air attempting to land a backflip like I saw Olympic gymnasts do.

I thanked him a few weeks ago for the tennis racket and the gymnastic coaching, neither of these heroic, stepdad acts he remembered.

A girl could dream and I did, despite many of those fantasies evaporating as they came up against my own limitations, physical and otherwise. The rules, expectations, and boundaries of others’ making also held me at bay, some designed to keep me safe and secure until I was ready to create my own.

But I never stopped dreaming, the Athlete in me taking shape in the form of the qualities I was developing–the passion, the discipline, the focus, the resilience, the commitment and the love of the Game (of Life).

I believe my last conversation with my stepdad about my writing was such a sweet gift because in him asking that question, he took me back to that place of the Innocent when I was a little girl frantically reaching for his outstretched hand as I hurled myself in the air so he made sure I would land on my feet.

And so on this Aries Full Moon, I promise to my poppa (this name I was given for him in a ceremony I did earlier this year), I will write the words in the language I love.

Thank you for loving me enough to hold the space for my dreams–even the ones I’d forgotten and the ones that were never going to come true in the way I had innocently imagined.

And I promise on this Aries Full Moon until I see you again in both our pure loving forms to remain the Fool for Love, the Player of the Game, and a Warrior of Love and of Light.

PrevPreviousNew Moon in Virgo: When the Heart Breaks, the Moon Lights up the Medicine
NextNew Moon in Libra: Love’s Cautionary TalesNext

26 thoughts on “Full Moon in Aries: Love You to the Moon and Back”