New Moon in Leo: You and Your Last Performance 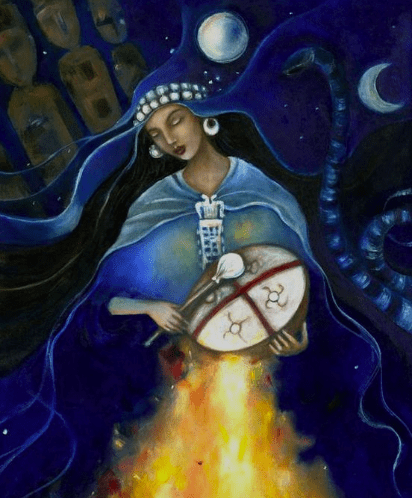 Kuyén, Moon Goddess of the Mapuche people of Chile and Argentina
Painted by Claudia Olivos,
the immensely talented intuitive artist
of the Divine Feminine.
Her amazing creations can be found here:
https://olivosartstudio.com/
Gratefully used with her permission.

Happy New Moon!! A fresh start, a moment to catch our breath, to tune in and see where we’re at while we’re dancing around in the season of light-filled, joy-full Leo (the Sun and Mercury are there right now) and now a New Moon in Leo, the Lioness’s archetypal family ready to support and guide us through some tense times of change.

And so proudly the Creatrix in all her innovative glory steps onto the stage, followed by the Queen’s leadership, the magnetism of the Star, the playfulness of the Clown and the imagination of the Artist.

All of this fiery Lioness energy–the innovation, the leadership, the magnetism, the playfulness and the imagination swirling around us and within us, here for us to draw on just by stating our intention for that to happen.

Yet for this New Moon, the Leo archetype of your Inner Performer will take the stage just where and how She normally likes it, eager to hear from the crowd just how well she’s been playing her role.

Your Inner Performer, however, might not like the heat of the glaring spotlight thrust upon her this year as she’s being called front and center to address the soul learning she’s been undergoing in an attempt to elevate some of the Performer’s less exalted attributes, so in her healing, YOU can hear the love-rhythm of the cosmic drum that the spirit of our times is most certainly beating.

Our history is making itself known, individually and collectively. Whatever humanity has created in the past rooted in violence, in fear, in ignorance, in hate, in greed, in unforgiveness, in separation is asking for our full attention now, so it can fall apart, come tumbling all the way down.  We’re in some tension-filled times as a result that aren’t going away any time soon. In fact, for the rest of this year the astrological cycles and planetary transits are asking us to become comfortable with being uncomfortable.

So how does your Inner Performer feel about all of this gut-wrenching, hand-wringing discomfort?

If you relate to this particular archetype and you’re conflict avoidant, likely you feel terrible–nervous, anxious, impatient, angry, especially if you want life to return to the way it once was, if you want to feel safe in the roles you normally play inside and outside of your home.

But you might have realized that “you” and “normal” are never, ever getting back together.

So what’s a Performer to do when she’s been taught all her life to do just that–perform?

Your answer may lie in asking yourself which archetypal energy navigates your life’s experiences–the Victim or the Witness?

If your Inner Victim is dominant, your tendency will be to collapse, blame, project, shirk responsibility for your participation in historical creations, make decisions in fear, hide out, feel powerless in addressing what you see going on around you and inside of you.

Your Witness, rather, will see any inner or outer confrontation and conflict, anger and aggression, rebellion and protest, chaos and discord as opportunities to go in, to see how comfortable you are with change, experiencing conflict and tension, how well you take being called out by someone or something, having lines being crossed, then setting or re-establishing boundaries,  making plenty of mistakes along the way.

Can you trace back to the time when you first assumed a performance role and then how well you learned to play the part?

You could be someone who was literally trained as a child to be on a stage because you were a top athlete, studied dance, played an instrument or acted in your school’s plays. Consider all the training it took to give a flawless performance and how much applause was showered on you or adoration you received for a job well done.

Or maybe the child Performer for you had more serious reasons and consequences for taking on a role and acting a certain way.

How many of us had families in which we took on the premature role of a parent or adjusted our behaviour to address the troubling and traumatic things we saw unfold in our homes?

Maybe you had a parent who had an addiction. Maybe you were abused or assaulted and then were asked to keep the violation silent or if you did speak up, you were not believed?

Or maybe you were the child performer who screamed and had tantrums to garner the attention you were clearly not receiving?

As a child, learning to perform then was a survival strategy that had you on high alert, called you to be perfect, afraid of life hurtling out of control, feeling anxious about making mistakes, concerned about saying the wrong thing, fearful of being rejected, judged, criticized or called out.

The child Performer having grown into the adult is still hyper-aware of making mistakes (or others making them), fearful of not being liked or criticized, having developed stage fright (or a false bravado) in stepping up and speaking out about the hard stuff life is showing to her personally and collectively.

The Performer as her True Self must liberate herself.

You come into your heart and into integrity –and the perceived opposition begins to melt, inner conflicts neutralize and wise, impactful steps can be taken because you’re living from the Truth of your Purpose and from the sacred knowing of who you are, sourced from Unconditional Love.

In your exalted expression of the Performer for Love, you devote the rest of your life to your great love-work, bringing devotion to your craft, artistry in how you care for yourself and others, giving yourself plenty of room to grow and space to learn while we all figure out how to move through these times of radical change.

We are all performers here–all having a role to play. How will you creatively attune yourself to the new vision and the Beauty Way? What will your new fully human, fleshed-out role be?

New Moon Ceremony: We Can Dance If We Want To

What will you do this New Moon to move the energy? To perform for Love, not to be Loved–cause you already are so very well loved.

*Where does the Performer show up in your life?

*How well has she or he served you? At home, at work, in social media, in your relationships to self and others?

*Where does the Performer take away the truth of who you are and how you might be called to serve?


Along with journaling about the questions above and setting New Moon intentions to address what you’re ready to release and how you would like to show up to your life right now, why not move your body as an expression of your visionary heart?

Creating intentions or goals through movement can be just as powerful as writing them down.

Historically, dance has been used as an act of rebellion to send a strong message to authorities that have restricted people’s movements and stripped them of their rights, the movement and music disrupting the energy while creating hope, inspiration and fresh energy for empowerment, revolution and transformation.

If you were going to address some part of you that’s connected to the energies of injustice, anger, rage, victimization, impatience, frustration, stagnation, grief, or hopelessness, what would your dance look like, feel like?

Dance, drum, chant, sing, paint, write, cook–Leo is here to remind you to engage in your full authentic expression.

And comment below how the Performer is stepping up and out in your life.

13 thoughts on “New Moon in Leo: You and Your Last Performance”